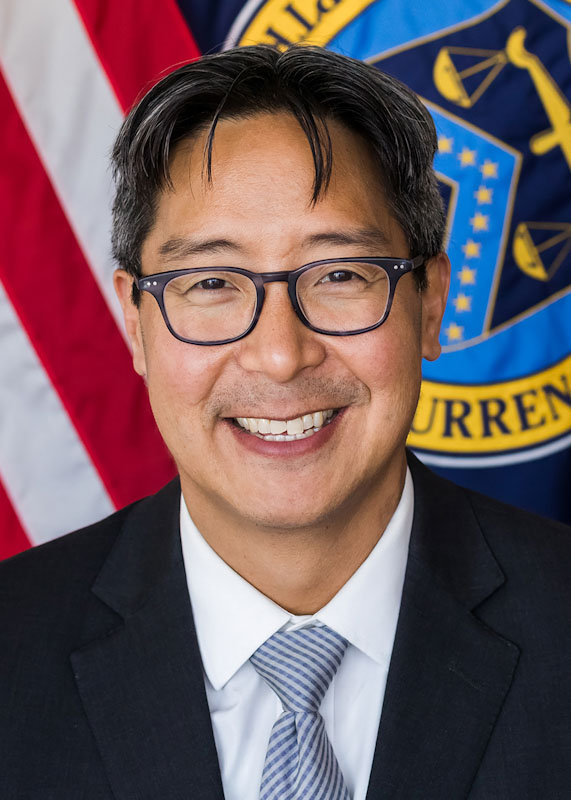 Office of the Comptroller of the Currency

Michael J. Hsu is the Acting Comptroller of the Currency.

Hsu became Acting Comptroller of the Currency on May 10, 2021, upon his designation as First Deputy Comptroller by Secretary of the Treasury Janet Yellen pursuant to her authority under 12 USC 4.

As Acting Comptroller of the Currency, Hsu is the administrator of the federal banking system and chief executive officer of the Office of the Comptroller of the Currency (OCC). The OCC ensures that the federal banking system operates in a safe and sound manner, provides fair access to financial services, treats customers fairly, and complies with applicable laws and regulations.

It supervises nearly 1,200 national banks, federal savings associations, and federal branches and agencies of foreign banks that serve consumers, businesses, and communities across the United States and conducts approximately 70 percent of banking activity in the country. These banks range from community banks serving local neighborhood needs to the nation’s largest most internationally active banks.

The Comptroller also serves as a Director of the Federal Deposit Insurance Corporation and a member of the Financial Stability Oversight Council and the Federal Financial Institutions Examination Council.

Prior to joining the OCC, Hsu served as an Associate Director in the Division of Supervision and Regulation at the Federal Reserve Board of Governors. In that role, he chaired the Large Institution Supervision Coordinating Committee Operating Committee, which has responsibility for supervising the global systemically important banking companies operating in the United States. He co-chaired the Federal Reserve’s Systemic Risk Integration Forum, served as a member of the Basel Committee Risk and Vulnerabilities Group, and co-sponsored forums promoting interagency coordination with foreign and domestic financial regulatory agencies.

Hsu began his career in 2002 as a staff attorney in the Federal Reserve Board’s Legal Division. He holds of a bachelor of arts from Brown University, a master of science in finance from George Washington University, and juris doctor degree from New York University School of Law.